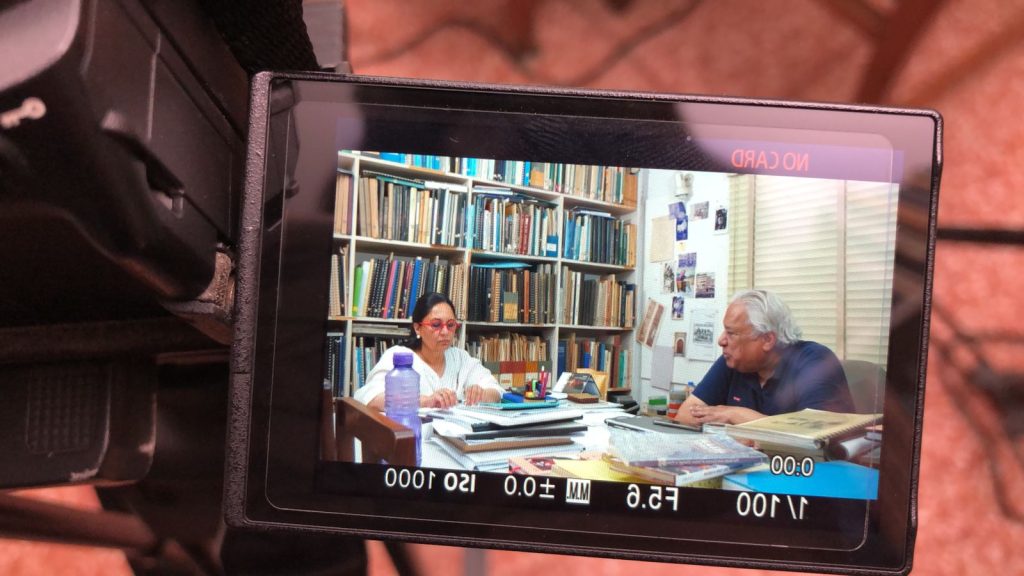 In continuation of the public programming initiated by the Lahore Biennale Foundation (LBF) and in response to the new forming realities post C-19 pandemic, LBF is setting up a Virtual Museum: an online open source digital platform.

It is a Public Art Project based on new and archival research on cultural and artistic research – a platform for artists, creative practitioners and visitors to create projects that investigate their shared cultural heritage and the legacies of creative practice that have emerged from it, with place being a significant contextual frame.

New ways of experiencing and thinking about culture carved out by virtue of technological advances, will be utilized to reconnect the public with their heritage, while simultaneously allowing them to collectively create a new understanding of their current cultural landscape. The virtual museum will amplify local voices in a way its physical counterparts cannot do , as it lets local actors tell their own stories by creating digital representations to serve as emissaries of their cultural values – values that have themselves evolved over time to have multiple meanings.

The LBF Virtual Museum will have multiple components.

This segment reflects on the birth and evolution of women’s movement in Pakistan. It engages with the development of a feminist consciousness and the shifts in feminist politics ranging from political resistance and public-reform based to taking up issues of sexuality and body politics in the public sphere. And, investigates the challenges confronting the contemporary Pakistan women’s movements and the role of arts as a protagonist.

This segment also engages with the themes of women’s access to civic spaces, the relationship between women and the state, religion and feminism, cultural notions of women and its effect on the debate around bodily autonomy. A meditation on the legacy of women’s movements and feminist activism in Pakistan over the course of the last 75 years.

2. Post Modern and Contemporary Movements in Visual Arts and Other Creative Forms:

This segment interfaces with emerging new forms of modern and contemporary movements and shifts in the visual arts and other creative forms. And, investigates the artistic response to the state of constant evolution we are going through as we live under the influence of new forms of colonisation: religious and political-ideologies, geographic, economic &amp; military influences– especially as influence of foreign powers increase both directly and indirectly in Pakistan and the Global South.

This segment looks at art practises post the advent of modern arts schools – or because of – and the evolution of the Pakistan art scene through multiple catalysts of change. And, the resulting new creative mediums and how they intertwine with questions of postmodernism, decolonisation and identity. Also, examining the place of Pakistan’s contemporary arts movement on the global stage, where disparate contemporary arts movements – each engaging with varying artistic concerns – come together.

Open Call for Artists for this component can be accessed at this link.

This segment explores the plurality in the postcolonial identity. As nation states and cultures evolve, the idea of postcolonialism becomes of critical importance, as both states and cultures continue to reinvent themselves– physically, mentally, emotionally, and economically – in order to carve out a new path after being colonised. A hybrid identity exists in nations that have gone through the trauma of colonisation, which contains dual influences of the coloniser and the colonised.

Postcolonial art holds the potential to reveal much about the process of identity formation and could constitute critical starting points for the re-envisioning of postcolonial histories, as we live under the influence of new forms of colonisation – religious ; political-ideological(ies), geographical &amp; military responses, especially as the influence of foreign power increases both directly and indirectly.

This segment is primarily a reflection of 75 years of Pakistan – then and now; a glance at the making of modern art schools – the significance of tea houses, Adbi baithaks, and the role of academic institutions on the Mall road and the making of the new movements and shifts in arts within Pakistan, the region and diaspora.

4. Architecture through Time and Space:

This segment also examines the movements and shifts in architecture and how its current modalities have evolved to and exist in the present time. It charts the architectural response to rapid urban development– now that climate emergencies have made the need for sustainable living a fixed reality, and the struggle of old and new practises to achieve sustainable growth. This segment also engages with the role of decolonisation and democratic architecture in urban spaces.

This segment will engage with the interlocking movements and shifts within the realms of Pakistani cinema, drama, theatre and dance in relation to the cultural, religious, state and political nuances over the last 75 years.

It will examine various themes, including: the decline and revival of cinema & drama– the divergent paths of the film and drama industry, censorship and cinema, and the rise of independent films and artistic projects.

This segment will also investigate the legacy of the performing arts in Pakistan, by exploring further themes such as: the dying tradition of the Bhand, street theatre and political dissent, infamous night theatres/stage plays & the mujra dances – obscenity or art?– the role of the transgender community within the dance tradition, and the legacy of traditional dance forms in Pakistan. In essence, this segment shall be a meditation on the evolution of local cinema, drama, theatre and dance, and their present state.

6. Legacy of Storytelling and Contemporary Literature in Pakistan and the Diaspora:

This segment reflects on the legacy and evolution of storytelling in Pakistan, and all its varying forms. The oral tradition of dastangoi, the role of literature in imaging the identity of the nation, the development of postcolonial literature, contemporary Pakistani anglophone literature, and the cultural politics of language and its effect on literature.

Open Call for Research Collaborators (Photo Essays) for this component can be accessed at this link.

This segment will pay homage to the rich history of musical legacies and emerging contemporary forms in Pakistan. Various genres of musical expressions (its insularity, teaching system, khayal practises, sanctity of raga time-cycles and gharana loyalties) as well as the craft of instrument making will be explored. Musicologists tend to experiment with their art which can be seen by some as defiance while it leads to formation of new forms of expression; while the audience will go on a historical tour of contributions of pioneers of the classical and folk music through demonstrations, talks, workshops or panel discussions and further upon the conversation by looking at emerging contemporary forms like pop-folk fusion and neo-Sufism.

As Chaitanya Kunte, musicologist and harmonium player, says, “In the last century, few musicians have paved a path that amalgamates tradition and new thought”, the role of practitioners as change makers within the context of changing political scenarios – as rebel, reformers or interpreters, will also be discussed.

Curator : Women’s Movements of the 80s: Then and Now

Farida Batool is an independent artist who explores Pakistan’s political upheavals and tumultuous history. Her research interests are new media, masculinity, visual cultural theory, and city and public spaces. She is currently teaching and heading the Department of Cultural Studies at National College of Arts, Lahore, and has authored a book, Figure: the popular and the political in Pakistan. She is an active member of Awami Art Collective working in public spaces. She presented papers and presentations at international conferences and workshops including Yale University USA; Society for Cinema and Media Studies, Montrel, Canada; Oxford University, St. Joseph’s University Philadelphia and many more.

She has exhibited extensively in many international and local solo and prestigious group shows. She is an active member of Awami Art Collective which aims to use art in public spaces to generate a discourse of peaceful co-existence.

Curator: Post Modern and Contemporary Movements in Visual Arts and Other Creative Forms

Dr. Razia Sadik is an Associate Professor at the Syed Ahsan Ali & Syed Maratib Ali School of Education, Lahore University of Management Sciences (LUMS) where she teaches courses in Arts Education, Slow Looking and Curriculum Design. Her professional practice and research interests are in arts higher education, teacher education, critical pedagogy, arts-based educational research, and critical curatorial practice. She is interested in researching the learning of adults, particularly artists and teachers at work. Her curatorial work aims to extend art as a mode of inquiry to communities through gallery and museum education. Dr. Sadik received her doctorate in Art Education from Teachers College, Columbia University, New York, her MA from Central Saint Martins College of Art and Design, University of the Arts (UAL) London, and her undergraduate from the NCA, Lahore.

Masooma Syed is a visual artist from Pakistan but worked and lived for many years in different countries of South Asia. This makes her art trajectory unusual as an artist and as an art educator.

Syed’s art practice involves intricate processes of materials and making with hand, layered ideas of reality, society, fiction, and multiple narratives of human life. Her personal history shapes the aesthetics and politics of the materials she uses. Her visuals are a conundrum where kitsch is celebrated, the convention is flouted and slickness is derided. There is dismissal and protest, in the use of thrown away, discarded, inexpensive, and leftover materials.

She Practiced and taught art in several universities and art schools across South Asia; such as like National College of Arts, Pakistan, School Of Culture And Creative expressions, Ambedkar University, Delhi, Kathmandu University, Nepal, Swami Vipulananda Institute Of Aesthetics, University of Batticaloa, SriLanka. She is the recipient of  Commonwealth Fellowship of Art and craft, University of New South Wales, Australia-HAT, Here and There, Art and craft fellowship, Manchester University, and several International artist residencies.

Curator: Architecture through Time and Space

Tanvir is an accredited conservation architect with extensive experience of conservation and regeneration. She is the Deputy Chairman of Donald Insall Associates, one of the United Kingdom’s leading conservation practices. Her work focuses on the conservation of historic fabric and managing change within sensitive heritage sites. She has worked extensively on Scheduled Monuments and World Heritage sites in the UK and her many conservation projects include award-winning schemes along London’s Regent Street and North Audley Street.

She is currently working with the World Monument Fund in Iraq and Kurdistan. There her projects focus on reinstatement of lost memory through conservation and sensitive regeneration, as part of post- conflict reconstruction, and include most of the ongoing restoration of Mosul Museum destroyed by ISIS in 2015.

Tanvir has worked extensively in Pakistan; she has taught at the National College of Arts and is a founding member of the Lahore Conservation Society. She has lectured on conservation, regeneration and sustainability at the Bartlett Faculty of the Built Environment London University, the Graduate School of Design Harvard. She is member of Historic England’s London Advisory Committee, sits on the Fabric Committee of the Albert Hall London, to advise on the conservation of this historic Victorian Hall.

Curator: Legacy of Storytelling and Contemporary Literature in Pakistan and the Diaspora

Born and raised in Lahore, Ali Usman Qasmi is a historian of modern South Asia. He has published extensively in his area of expertise, including two monographs – Questioning the Authority of the Past: The Ahl al-Quran Movements in the Punjab, and The Ahmadis and the Politics of Religious Exclusion in Pakistan (winner of Karachi Literature Festival Peace Prize). Along with several journal articles and chapters in academic works, he has co-edited three volumes, including Muslims Against the Muslim League: Critiques of the Ideas of Pakistan. He has previously been the recipient of the Newton International Fellowship for postdoctoral research. Since 2012, Qasmi has been teaching history at the LUMS University’s School of Humanities and Social Sciences.

The Lahore Biennale Foundation is partnering with the British Council to develop the LBF Virtual Museum.