Lahore Biennale Foundation (LBF), in collaboration with Habib University, hosted an Arts Residency program that sought to encourage a collaborative multidisciplinary approach by employing diverse and sometimes disparate methods of inquiry to a single subject. The selected candidates received Rs. 50,000 as artist stipend and Rs. 50,000 as material stipend, each.

In 2015, the residency focused on the concept of Metropolis and the multifaceted and ever-evolving dynamics of urban culture. The city acted as a ‘model’ for the investigation of different parallels present within an urban setting and its subsequent effect on the community. The findings of such an exploration culminated in an open house exhibit and an artist’s talk.

Metropolis Open House was the culmination of four weeks immersion in the city by four different visiting artists working in close proximity. The result described a reaction to the materiality and sound of the city, to the skyline, to scale and to subtle, social interactions in the arteries of the city: the roads.

Arham used tracing film to document the intricacies of an almost anonymous skyline. The use of slide-viewers is a move into more sculptural practice, inspired by work alongside her fellow resident artists here. The smaller, rolled drawings were stacked in a way that transforms the normally two-dimensional physicality of the drawing into a 3-dimensional aspect.

Zahid documented the mute palette of the sky, as well as the skyline, by creating small-scale portraits of Karachi. The structures across the city skyline became characters in her smaller drawings and sculptures. She examined how they intervene with our daily lives and at the same time interact with one another.

Bradley and Weaver imagined a series of works that to them reflect intricate aspects of the city and the hidden layers of social relations. They used traditional techniques to make something fragile and touch responsive out of a thing that is usually robust, referring to unspoken truths.

Mina Arham graduated with honors from the National College of Arts, Lahore. Her work has been exhibited at Taseer Art Gallery (2014), the Alhamra Arts Council (2013) and in Indonesia (2014). Recently, she worked with the Aga Khan Foundation on the restoration of the Shahi Hamam (Royal Bath) in Lahore and was the recipient of the Gasworks Residency (2015).

Fari Bradley and Chris Weaver are British practitioners whose collaborative work encompasses performance, sculpture, experimental music, expanded radio, and media practices. In response to the domination of visual culture, they focus on an investigation of sound as a means to examine social relations between a subject and its occupied space.

The project was initiated by LBF and Habib University, Karachi.

LBF would also like to thank the British Council for their support in this endeavor. 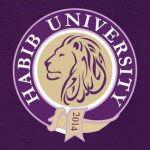