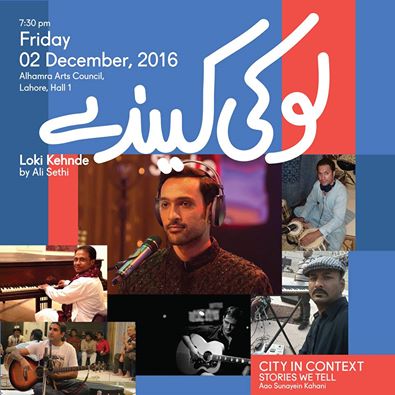 A four-day symposium, City in Context is a collaborative venture that brings forth three key projects: Urbanities – Art and Public Space in Pakistan by the Goethe-Institut Pakistan and Lahore Biennale Foundation (LBF), and Stories We Tell (Aao Sunayein Kahani) by the Beaconhouse National University – School of Visual Arts and Design (BNU-SVAD), the Centre for Culture and Development (CKU) and the Lahore Biennale Foundation. It also introduces the inaugural Lahore Biennale 01 through the first-ever public introductory session in Pakistan.

In a mix of workshops, talks, performances, discussions and exhibitions, City in Context will bring together poets and writers, theoreticians, artists and architects, musicians, activists, and various other practitioners from diverse fields of study. It will aim to discuss and expand existing ideas and projects pertaining to the multifarious aspects of the urban realm, and to explore the wider connections that they draw with the world of art.

Urbanities – Art and Public Space in Pakistan, is a critical exploration of the urban. Throughout 2016, the project incited discursive and artistic contributions and interventions related to Pakistan’s multidimensional urban space. Germany-based and Pakistani artists were invited to engage with Karachi and Lahore in an artist residency, and German-Spanish architecture collective carried out an investigative research project on informal urban ​design practices and collective technologies. The symposium will present research and works produced during the residency, complemented by a series of insightful discussions and workshops by international and local urbanists, artists, and activists. Various notions revolving around community and practice, usage of space, progress, artivism and action, accustomed and contested space, environmentalism and public art along with the possibilities and definitions of mapping, will be discussed.

Stories We Tell (Aao Sunayein Kahani) is an audio-visual storytelling project that explores narratives of Lahore and strives to bridge gaps between communities and individuals by cultivating an exchange of stories. As one of the main components of the project, site-specific urban interventions in the form of story-sharing booths were placed at various locations in the city for a period of 7 months. Additionally, in the spirit of mutual exchange and benefit, students from BNU collaborated with the Mirasi community of Lahore. For the concluding component at the symposium, talented individuals from this community will partner with renowned musician, Ali Sethi and present a musical performance. The program will also consist of panel discussions and presentations by various thinkers, practitioners and academics, along with a final exhibition of audio-visual stories.

Lahore Biennale 01 was hosted by LBF in 2018. The curatorial premise of the Biennale aimed towards rethinking and reinventing existing Biennale formats, dispelling the concept of “one grand exhibition”, and exploring fully the artist/public and gallery/public space dichotomies. Conversation was one of the pivotal components of the curatorial process. With critical discourse and debate at its core, Conversation functioned not as a prelude or postscript to the event; rather, a coexisting mechanism that initiated systems of experimental debate. The symposium presented the first public discussion session in Pakistan with the aim to contribute to the larger discourse surrounding the curatorial premise. The introductory seminar was designed as a think tank session, with the audience as participants in conversations with professionals from diverse backgrounds.

Beaconhouse National University, School of Visual Arts and Design (BNU, SVAD)
The Beaconhouse National University, Mariam Dawood School of Visual Arts and Design (BNU, SVAD) welcomes new forms of visual experience and offers a multidisciplinary approach as a way to explore the connection between art and different branches of knowledge. They believe that art and design education makes great demands on all who engage in it, both the students and faculty. BNU, SVAD encourages experimentation and aims to ensure that each student is visually articulate and equipped with the ability to consolidate ideas and concepts. Providing their students with the opportunity to achieve their creative potential is a primary objective.

To view details for The Making & Unmaking of Urban Conflicts. A Workshop , please visit:
https://www.goethe.de/ins/pk/en/ver.cfm?fuseaction=events.detail&event_id=20871533

For more information about the Urbanities Project, please visit:
http://lahorebiennale.org/projects/urbanities-arts-public-space-in-pakistan/